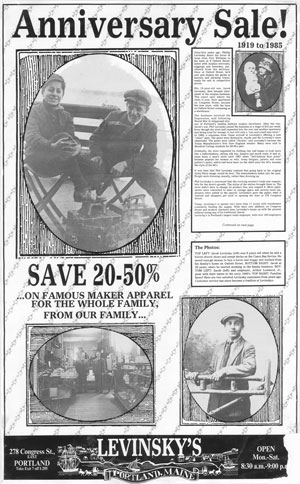 This 1985 flyer for an Anniversary Sale offers a glimpse into our long history serving the Portland area.

The story of Levinsky's began long ago when Phillip Levinsky would regularly bring his horse and a team of helpers from Fort Williams to his barn at 8 Oxford Street in downtown Portland carrying bundles of surplus overcoats, leggings and breeches all purchased from the military with him. Once there he would sort and display his goods in barrels and packing crates, all marked for sale at competitive prices.

Soon after, Jacob Levinsky, his 19-year-old son, became interested in the surplus business and opened the first Levinsky's store in 1919 at his apartment on Congress Street, a store which would remain open well into the 1990s. The store managed to survive even through the Depression in the 1930s and following World War II blossommed into Portland's leading military surplus merchant.

Little by little the store expanded its clothing line and became known as what was then called a "haberdashery", or a store that dealt particularly in upper-end men's furnishings, including silk ties, blazers, and trench coats. In fact, Levinsky's had always been a men's-only store up until the 1967 popular explosion of bell-bottom blue jeans, worn both by and men and women. During this time army fatigues, jackets and painter's pants, regular items for sale at Levinsky's, became the style of the 60s and gradually the upper-end menswear disappeared from the shelves as people became to dress more casually, rather than dressing up.

Now at its present location on Route 302, the store continues thriving due to Levinsky's unique ability to provide high-quality products from well-known brands at lower prices than anyone else in Maine.